The purpose of this site is to draw people into the presence of the Living God, encouraging us to become people of the Way who reflect the nature of Jesus as we seek him with our whole hearts.
This ministry does not solicit funds. Our survival, direction and reach is in the hands of God.

The messages are written by a retired pastor (REB) who has been writing for over sixty years. He writes anonymously or under the pen name of Robert E. Burnell. Among his published works are "Escape from Christendom", "Set our Hearts on Fire", "What are We Waiting For?" and "Where to Lord".

Maranatha… A unique Aramaic term used once in scripture (1 Cor. 16:22).  Early Christians used it as both a prayer ‘maranâ thâ’ (מרנא תא, in Aramaic) “Come, Oh Lord” … and as a greeting or a declaration to other believers … ‘maran ‘athâ’ (מרן אתא), “Our Lord has Come”!

The Message version of the scriptures paraphrases maranatha beautifully as…

“Make room for the Master”

Mirror… A call for us to reflect our living Lord as we carry the cross, living as people of his way; To be a reflection of his presence now and of his coming kingdom.

We can all draw close to him with the veil removed from our faces. And with no veil we all become like mirrors who brightly reflect the glory of the Lord Jesus . We are being transfigured into his very image as we move from one brighter level of glory to another. And this glorious transfiguration comes from the Lord, who is the Spirit.

Prayer … Our precious Lord, your Kingdom is here as you dwell in the hearts of your people. How amazing and wonderful you are. We call for your kingdom to come to all… Come Oh, Lord. May our daily loves reflect the beautiful gift you have given us, your life as a sacrifice.  May we make room for you, our Master. 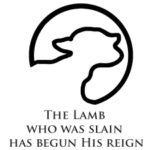 Maranatha Mirror began as an outreach ministry of Messiah Lutheran Church in inner city Detroit. It was originally part of the Messiah Bookroom ministry. Tracts, books, and pamphlets were created to handout to the community and to disciple believers. The messages were meant to open hearts and ears to the call of our Living God.  The messages remain in publication because they continue to resonate with power. Originally a group of volunteers put together the tracts and booklets and went out as teams to pass them out. Bob Domm took on the ministry for 25+ years and brought it into the digital age with this website and weekly email postings  The ministry is currently being managed by Edward and Valerie Pettovello who hope to carry it into the future. Pray that God guides and inspires us as we move forward, seeking to reach new generations with these life sustaining messages.

Since the story of Maranatha Mirror is closely associated with a tremendous outpouring of the Holy Spirit at Messiah Church an excerpt from the church’s website is included below.

“In 1958, Richard Bieber ( aka Dick Bieber the author of the messages found on this site) accepted the call to serve as pastor at Messiah Church; beginning what would be a thirty year commitment. The years 1958 through 1969 saw many changes and much fruit being born. More and more the church opened its doors to the local neighborhood and community and experienced a strengthening in its base of committed believers as members. Annual visitations of church members and others in need or open to the Gospel numbered into the thousands. Individual intercessory prayer on behalf of each member was encouraged. Strong proclamation of the Word of God in preaching and teaching and sincere worship of the Living Lord was the foundation upon which all hope for church growth was laid.

The decade of the ‘70’s was one of harvest. Beginning with an outpouring of the Holy Spirit there was a fresh anointing of the congregation which many believe happened around Palm Sunday of 1970. This, coupled with a large influx of what was known as “Jesus People” in that same year caused a rebirth in the congregation that would forever impact this church.

Much of what had been regarded as standard church life and practice gave way to burgeoning nets filled with people. Young, long-haired anti-establishment types as many of their older, more mainline and conservative parents and relatives were being drawn into the kingdom as those in the dark being drawn to a great light. “A city on a hill cannot be hid,” it was preached: and so it was.

Black, white, Hispanic,
Jew and gentile,
Young and old,
Conservative and liberal,
Rich and Poor, Urban and suburban,
Were being forged into a new family of God at Messiah.


The rest of the decade continued as it began with a growing emphasis on “the priesthood of all believers,” outreach ministries, pastoral care and visitation by greater numbers of believers and supporting the work of the kingdom of God across superficial denominational and cultural differences.

The decade of the 80’s brought even more emphasis on worship, committed service, outreach, and supporting other churches and ministries throughout the kingdom of God. Many members were recognized and “sent out” to begin or strengthen other churches or ministries. Many influenced by the outpouring of the Holy Spirit at Messiah received calls to be pastors, missionaries and servant/leaders in a variety of formal and informal ways. Instead of building a bigger church to handle the increase, beautiful, gifted and called believers were constantly being gleaned from the congregation.”

Update: Currently, Messiah is an Evangelical Covenant Church. Although the congregation is aging and much smaller than in the past, members still serve and honor our Holy Master, praying for the Harvest and opening their hearts to his majestic presence.